It’s easy to see that there’s demand for security and encryption in today’s internet-focused world where people strive to protect personal information from companies, governments, and even each other. But in the case of these VPN routers, are people buying the products themselves, or simply the ideas that the products are pushing?

When you check out some of these crowd funding campaigns, a majority of the copy is persuading people why they need to care about security, not what the products actually offer.

Taking it directly from Keezel’s IndieGoGo campaign, they claim to be the “world’s first portable online freedom device [that] stop others from seeing what you do online. {The Keezel] [lets] you visit blocked websites all over the world, [lets you] watch the TV shows, sports games and other programs you love, but can’t reach. It [can also] secure all your devices with no installation needed, [so you can] be part of the worldwide Keezel network, combining the best providers into the largest and most resilient VPN network.”

Just from reading this small introduction, I can point a few ways Keezel is misleading customers.

If you’re wondering how exactly boxes like Keezle stack up against a REAL VPN router, we made a chart listed below. Red bugs illustrate information not given out about the specs of Keezle or Invizbox on purpose. This is very questionable–seeing how a purposeful lack of information can only indicate poor hardware specifications or uncertainty towards actual shipped product. In fact, Keezle has already had to step up their hardware after user complaints, but that still doesn’t mean it’s powerful now.

As you can see from the comparison table, you’re apparently paying extra for the portability of these devices. The Archer C7 has a much faster processor, more ram, and a lot more available bandwidth than any of the available portable routers–not to mention the quality of the providing VPN itself.

In some ways, portability is a valid argument, since these boxes are more portable than a  standard VPN router that needs to be plugged in via ethernet and through an AC adapter, but the very conception and design of the mobile VPN router product make it invalid in more ways than one.

Want to know what’s even more portable than a small little box? A browser extension, a VPN mobile app on your phone/tablet–or an easy to use software app on your computer. These are all softwares/extensions that don’t require a box in your backpack that work in any coffee shop or public Wi-Fi spaces.

Are these VPN router boxes that secure? 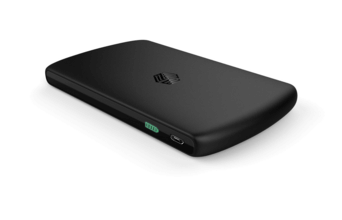 Another thing you should consider with these VPN router boxes is their security.  Some of these VPN boxes like Anonabox use adaptations of open source firmware that has been heavily changed and modified.

In essence, these boxes are no longer the same software as a standard VPN router. This means that the user (people who are buying these boxes are VPN noobs who like the idea of a simple plug and play router) must rely on these router companies to provide regular updates and follow security practices.

Who would you rather trust–some new corporation with untested firmware or the tried and true open source VPN firmware that has become the standard in the VPN consumer market?

Will they be fast?

One of the most important things to consider when purchasing a good VPN router is CPU performance. These router providers assure users that these boxes will not only be small but fast as well. However, data and specs don’t lie.
The CPU of a router handles all the VPN encryption which directly translates to how fast speeds are. With a slow processor, speeds will be much weaker, and you can see from our table that these routers have much slower processors than even a $100 router.

Should you get a portable VPN router?

We can give you a resounding “no”. VPN routers are a super niche product that don’t need to exist. You can accomplish the same things, with better performance, without the need of another box with software and browser extensions.

I made an entire guide about “Mini VPN routers” here. I think they are a much better solution overall, even if they aren’t as “wireless”.