Pros / ExpressVPN is extremely polished and easy to use. Mobile applications are great. Customer service is also attentive through live chat. ExpressVPN also seems to be working with Netflix lately.

Cons / ExpressVPN’s biggest achilles heel is the expensive price. Speeds have also been slowing down lately, but this can vary. ExpressVPN only has 3 simulatenous connections.

Verdict / ExpressVPN has good software apps, and using the VPN is extremely easy since it’s simple to setup.

ExpressVPN is marketed as one of the best VPNs with the fastest speeds available. The team behind this VPN promises  that their VPN solution is for everyone since it’s extremely easy to use. The question remains, does ExpressVPN hold true to its namesake in our ExpressVPN review? 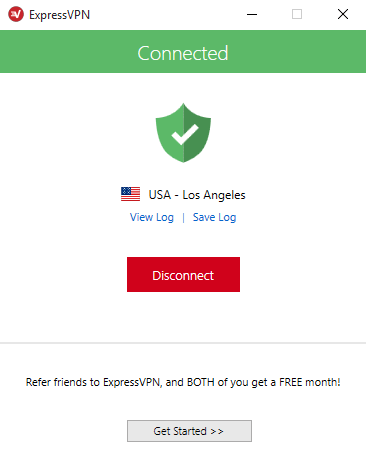 ExpressVPN utilizes the most basic approach to their software offering an extremely minimalist client that is very easy-to-use and easy on the eyes. Some VPN providers take the “minimalist” approach a little too far, and it’s hard to understand what application is running or how you have your VPN connected. ExpressVPN finds a suitable medium with an interface that clearly lets you know if you are connected or not and the approximate time until you are connected ( a nice green loading bar).

The  ExpressVPN app feels very basic, but the design is very smooth and clean. To find the options, you need to click on the three little dots at the top of the app, and from there you can play around with some settings or pick your server location or run a speed test. The speed test feature isn’t something I’ve often seen in other VPN providers and even though it did take awhile, it gave a good rundown of what speeds to expect or to choose.

ExpressVPN is now packed full of options with useful settings like auto-launch on Windows startup, connecting to the last location, and only using ExpressVPN DNS when connected to the VPN. Also, with a new update in April of 2016, ExpressVPN has once again updated their software with some more visual flair as well as added a network kill switch. 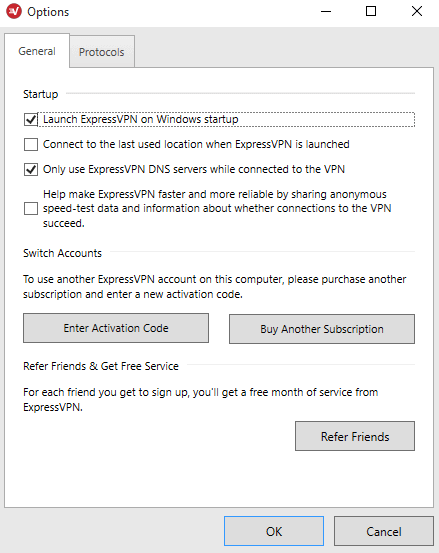 It’s also very easy to change to your preferred protocol inside the application with options like UDP/TCP, L2TP, PPTP, and SSTP. The default is just to chose your protocol type automatically, and I suspect that most people will leave it like this, but the options are nice to see. 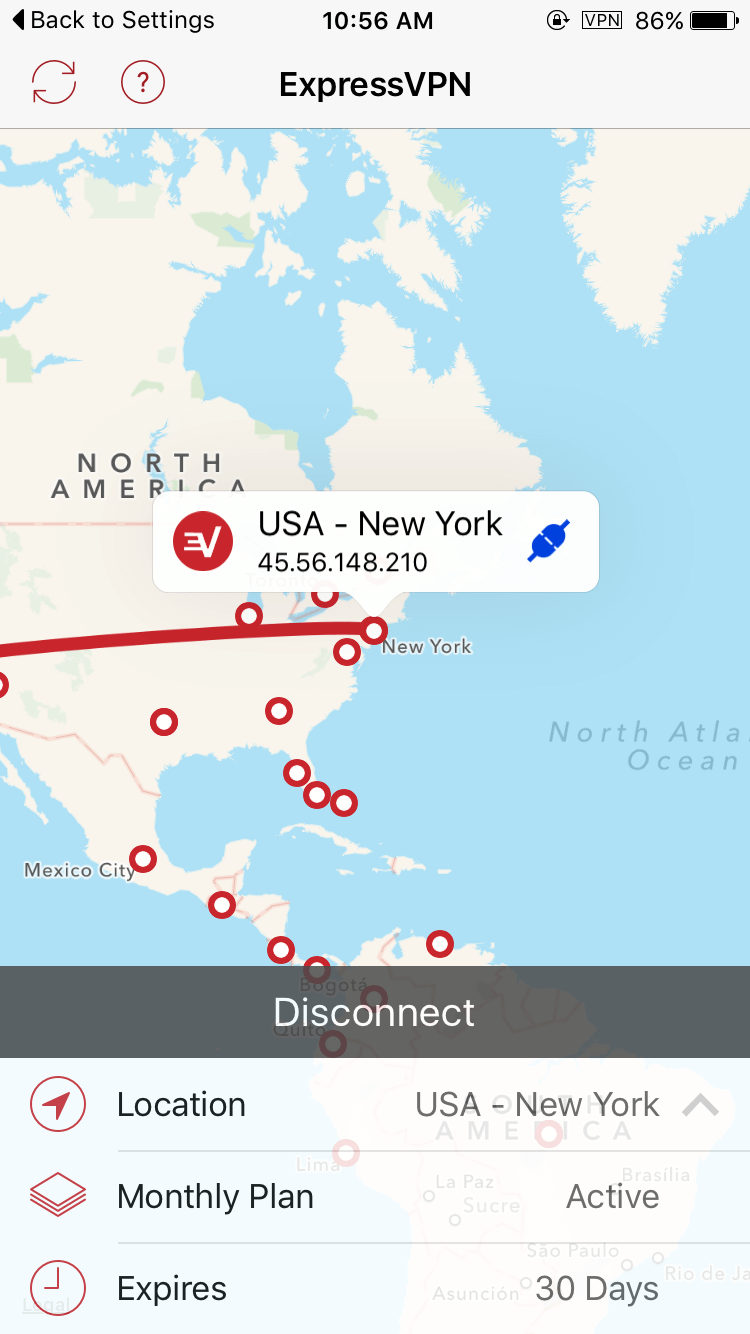 Like the PC application, the iOS mobile application for ExpressVPN is very simple and user-friendly. This time, however, the primary interface is centered on a map that shows your IP address / real-time location. A lot of VPN providers use these sort of maps, but I don’t like how effective they are at making me paranoid. I wonder if there’s a better way to say “everyone can see where you are, so use/buy us.”

Besides the map interface that shows your current connection, and then where it goes when it connects to a VPN, there are a few options below that show your monthly plan and expiration date, servers to pick in an excellent organized tab system with (recommended, favorites or all), you can also tap on a question mark icon that shows some information on how to get started, auto-reconnect settings, and the option to share diagnostic data.

The app runs well, looks great, installs easy, and doesn’t over complicate things. ExpressVPN has also updated it since the time of our review with a new in ap tour, and the ability to switch between protocols in-app.

ExpressVPN does a lot of things right. In fact, everything it sets out to do it does very well. The only bad thing about the VPN service is that it’s a bit limited with what you can do. ExpressVPN doesn’t offer any additional services for your one stop security need, like proxy encryption, email support, or VPN routers.

There does seem to be some stealth servers included within the server listing, but the site doesn’t promote that it’s heavily interested in protecting DPI or how–unless you do some digging to see that they say they are, but now how, or through what services. I went ahead and inquired about their stealthy options, and a representative informed me that stealth features are automatic within the VPN and servers are available in China. But since they don’t really advertise this as a selling point, or provide much information about it, I can’t say ExpressVPN is the best VPN for China.

I also talked to support about VPN routers, and they do have a partnership with an external company, but the site doesn’t advertise this or make it easy to purchase one. They do have a guide on it, however.

Other limits on ExpressVPN are that it only provides two simultaneous connections (1 computer and one handheld device). Most VPN providers offer 5 or more, but this is the least I’ve seen from a premium VPN (especially at this price).

ExpressVPN has a beautifully designed website, with easy-to-find tutorials, and graphics, but my favorite part about the website is the checkout process. Once you pay, it just brings you to a new page with a guide on how to setup every software and it even gives you a code to just enter into the installed application to get up and running quickly. You don’t even have to enter in your login information (even though it is provided).

I had no complaints with ExpressVPN’s server offerings. For some reason, the mobile client insisted on connecting me to a New York server, and the PC client wanted me to connect to a Los Angeles server (these servers offered best speeds and were most recommended from the server lists–but I found most servers close by gave the same speeds). ExpressVPN offers VPN locations in 100 cities in 78 countries.

The most important thing to consider about a VPN’s privacy is if it collects logs, and thankfully, ExpressVPN doesn’t. They do collect some standard information from their websites like billing information, or information from VPN use like times connected to service, choice of server location, and a total amount of data. All of this data is protected and used to make the servers better.

Recently we also discovered that ExpressVPN is only using a 1024 bit RSA key for their “stealth” Chinese servers, which can easily be factored by the Chinese government.

ExpressVPN notified us that they updated their RSA key to 2048-bit.

Recently I’ve done some more speed tests on ExpressVPN in 2017 and found them a bit more lacking than previously tested. They use to be one of the fastest VPNs I’ve tested, but I might need to do more tests soon to make sure ExpressVPN is slowing down. We’ve seen an number of customer complaints, however. 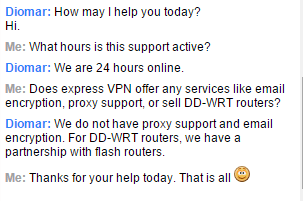 A lot of VPN providers claim they have fantastic customer support, and ExpressVPN is no exception with “round-the-clock customer support by chat or email.” After testing out multiple VPN support systems, and finding most didn’t deliver on their promises, I didn’t expect much from ExpressVPN.

The first time I was searching for live chat I just I typed in a query and only a minute or so I was chatting with a representative about their 24-hour support and information about extra services provided (not many sadly).

Another time I was seeking live chat but I couldn’t find it on their site–only the standard support email (fill out a form) system, which means that no one was available. So much for 24 hour support! Upon further reading, it looks like their support is limited to their main client timezone which appears to GMT.

ExpressVPN is one of the best VPNs out there, but there are some small hiccups along the way. The service is more pricey than many, and they strictly focus on their VPN offering that could be a good thing or a bad thing depending on what you need. If you just need a fast and reliable VPN without any extra services, some good customer support, good looking apps–ExpressVPN might be the one for you.

Thanks for reading our ExpressVPN review. Comment below with your experiences–head over to our forums to participate in discussion, or rate the VPN yourself to contribute to our community rating!