Cons / Loads of “add-ons” to purchase which can make the already “meh” priced Astrill VPN not an attractive purchase. Poor customer support with loads of unanswered complaints. No longer verified to be working in China which was Astrill VPN’s main “gimmick”.

Astrill VPN is a massive VPN in China, touted as one of the best VPNs for protecting against censorship enhanced by state of the art security features. But does Astrill VPN deserve such accolades? In this Astrill VPN review, we’ll go over what makes Astrill stand out, but we’ll also cover out some of its dirty secrets.

We’ve had numerous complaints from users saying that Astrill VPN is no longer working for them as a VPN provider. Here is one user’s extended complaint:

“I started in 2013 and renewed twice because it was great. Then it all went to hell in a handbasket. I’ve been very patient since I know they’re fighting a tough battle with Chinese censorship, but there’s no excuse for the terrible customer service. They should be sending us emails, pop-ups, providing online chat and doing whatever they can do to keep us informed as they change the processes.

Instead, we’ve been left to fend for ourselves and try to figure out different ways to try to connect, or whether there’s any use in trying at all! I believe they owe all of us a substantial refund for the time we have paid for and have had to deal with this issue. I’ll be very surprised if they can stay in business, which I’m sure makes the Chinese government quite happy.”

If you’re looking for an alternative to Astrill VPN, we recommend TorGuard VPN since it has all of the paid security features that Astrill had–but with TorGuard, you can get these security features and more for free with a basic subscription. Make sure to use code “Best10VPN” in checkout to get 20% off. Check out this article to see why TorGuard would be a good choice for China.

Astrill VPN has different payment options than most other VPN providers. Instead of offering a one-month subscription–they only offer three plans: a three month, six month and 12-month commitment. The six month and one year plan are priced well, but it’s disappointing to see a lack of options here for smaller commitments. If you’re looking for a similar VPN with a one month plan, that offers everything Astrill VPN does but cheaper, check out TorGuard VPN.

AstrillVPN offers excellent payment options on checkout (Bitcoin available), and they do claim to have a free seven-day trial. However, to get this trial, you have to give an arm and a leg to receive it. More on that in the support section.

Check out this list if you want to know the cheapest VPNs. 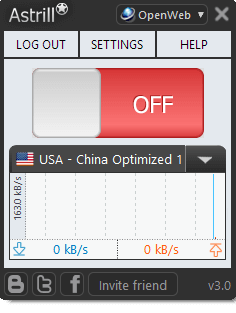 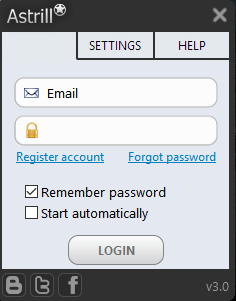 Astrill VPN has an extremely basic client. It feels strangely cute, as it’s just a small compact square box that contains the essentials. You can see your speed rate, choose your server, and connect to the VPN quite easily–as well as change how you’re connected (OpenWeb is an option for streaming and web browsing). You have the option of connecting through StealthVPN as well, but that requires an additional cost.

One thing I didn’t like about Astrill VPN’s client is how the settings and options are laid out. Each setting is separated into a different tab, which makes navigating between them annoying. Most VPN providers provide a few tabs that hold all the settings while Astrill VPN seems intent on separating everything. However, if you have the patience to click on each setting, you’ll find some important settings like “App Guard” which works like an application kill switch if your VPN disconnects, DNS settings to configure, as well as the ability to change your encryption strength.

However, if you have the patience to click on each setting, you’ll find some important settings like “App Guard” which works like an application kill switch if your VPN disconnects, DNS settings to configure, as well as the ability to change your encryption strength.

Overall, I didn’t have any major complaints with how Astrill VPN’s client performed. It was easy to get working without bugs, but the installation did require a restart. It wanted to close down Chrome, and it tried to install support for proxy services on Firefox which were minor inconveniences. 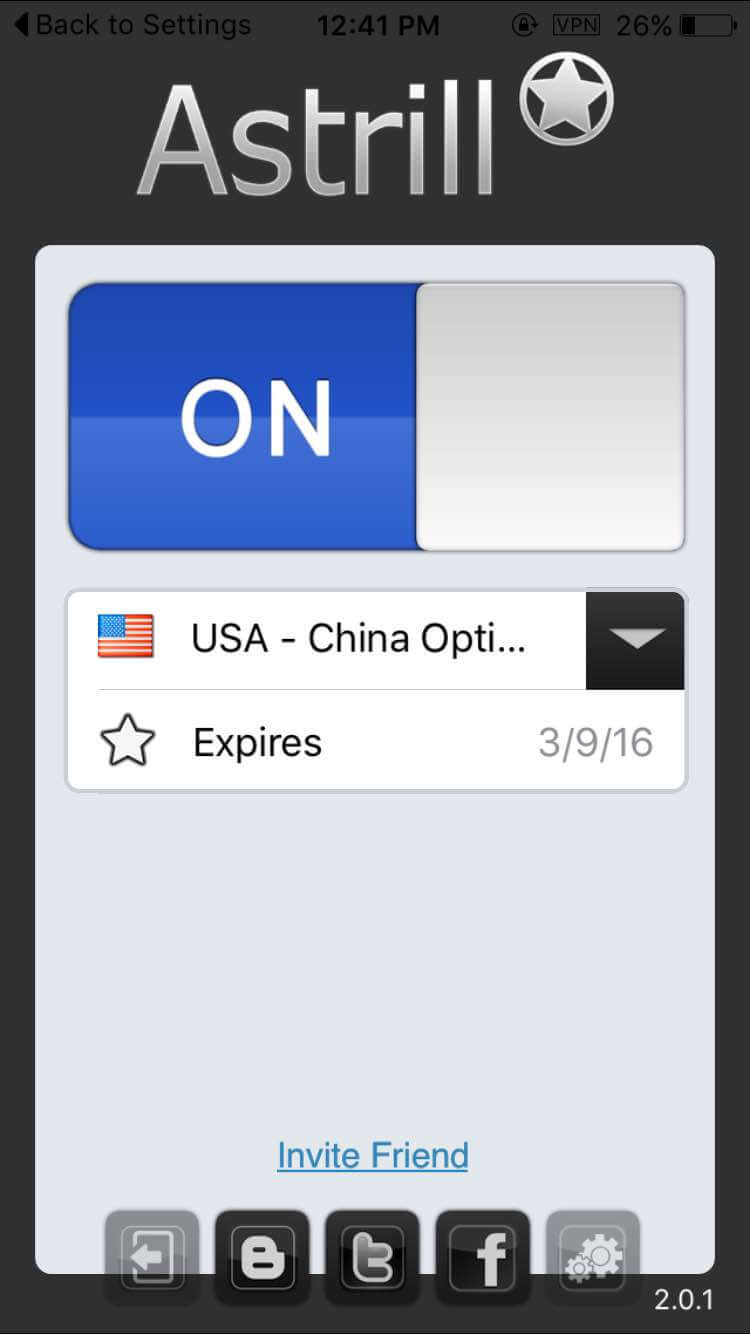 Astrill VPN’s mobile application is very similar to the PC counterpart. It was easy to install, and I got it working quite quickly. I loved that the application lets you connect to the VPN through the application instead of forcing you to rummage in the settings. 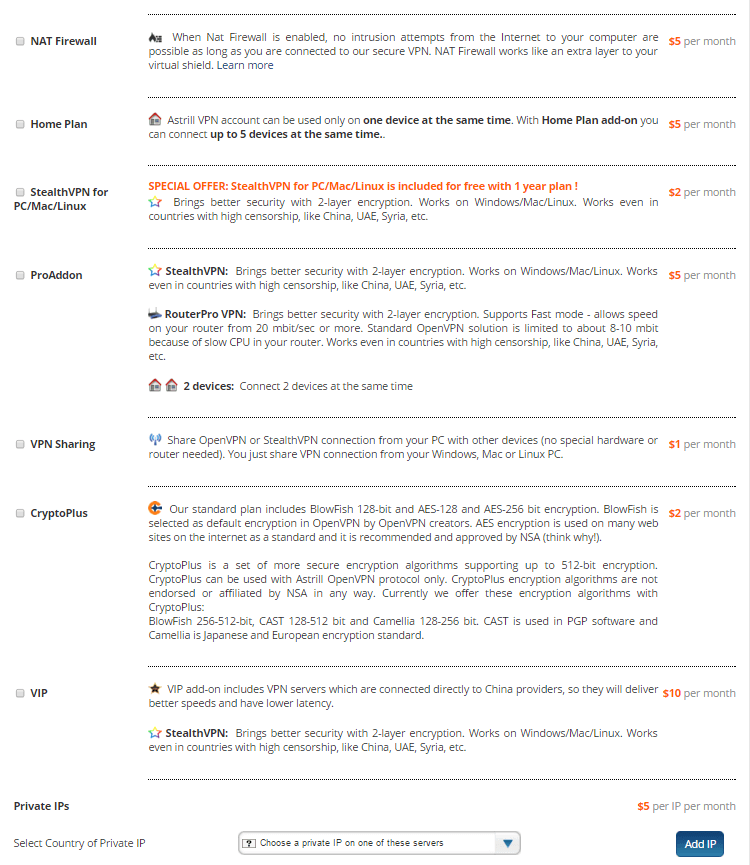 Usually, when a VPN has extra services, we are a big fan. In the case of Astrill VPN however, they have so many extra services locked behind additional costs that it’s quite ridiculous, not to mention confusing. They market themselves as one of the best VPNs for China, but the primary stealth server option costs 2$ extra.

Other options like paying 5$ more a month to have more simultaneous connections just seems greedy (Astrill only allows two which is less than most other VPN providers). I suppose that it is nice to have more options to spend your money (VIP gives you faster speeds in China, and crypto plus offers better security) but it’s frustrating to see how much it would all cost bundled together ( around 28$ extra dollars per month for every feature to be included). TorGuard VPN offers the same sort of stealth VPN service along with a stealth proxy but it’s included free.

Astrill VPN’s website has a fair amount of information, but it’s all cluttered behind copywriting that is intended to convert a VPN noob into a customer. Don’t expect to find any feature charts that list out what Astrill VPN providers differently as a VPN provider until you’re signing up to pay.

Some of my biggest complaints with Astrill VPN come with it’s glitchy and ridiculously thorough sign up process. To sign up for Astrill VPN, you have to provide a phone number and an address. Then, you have to verify your account with a phone number before you even can pay or use the free trial. I went through these steps, received my code, and I still couldn’t verify my account. This forced me to rely on the support team.

Other small things like account captchas and frequent spelling and fragmented writing in support guides and website copy also served to lessen the website experience. If you’re looking for a VPN that is extremely easy to set up with a great website, check out ExpressVPN. 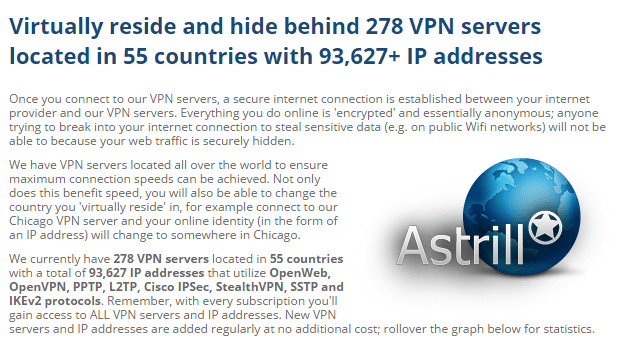 Astrill VPN has TONS of servers. I was able to find numerous servers close to my location that I haven’t been able to find using other VPN providers. More on server speeds in the speed section.

We got high speeds on our speed test using a nearby server. When we tested Astrill VPN on a Ubuntu torrent, our speeds weren’t quite as high as expected (around 5 Mbps average). Nevertheless, Astrill VPN’s tested speeds are very solid and great for media streaming and browsing.

After I had problems verifying my account (a ridiculous yet mandatory step Astrill VPN requires), I tried to make a new account and try the process again, since my original account wouldn’t work at all. I assumed it was some small glitch with the verification, but upon making another account, it wouldn’t let me verify at all.  I had to talk to support. The agent tried to help me, but every message I received didn’t come through right–resulting only in “?” instead of a code.  In frustration, I returned to my primary account and tried to reenter the original code I got–and it worked.

Once I got my primary account working, I ran into another problem. My client wouldn’t work with the 7-day trial that was supposed to be active on my account. After talking to support and explaining my issue, the representative wanted me to reverify my account all over again. Finally, after another good twenty minutes, I finally managed to convince the rep what error I was having, and he turned the trial on. Why wasn’t it turned on in the first place? The website pushes this trial option so heavily, but it barely even works unless you request it a certain way.

Astrill VPN does have live chat, and to be honest, their reps weren’t rude or anything–they were just super inefficient, a bit confused, and bogged down by stupid policies that Astrill VPN enforces (verification with a phone number, really?). If you’re looking for a VPN that is “on-point” with their live chat, check out TorGuard VPN.

Getting Astrill VPN setup with the right account and trial was an exercise in frustration. However, once I got my services running, the experience wasn’t half bad. The speeds are quite decent and the applications work well with plenty of servers to choose from.

Thanks for reading our Astrill VPN review!