Good / GhostVPN has TONS of security features inside their app that makes them stand out from the pack. Speeds are also excellent, and there are plenty of servers to connect to regardless of your location. The free browser proxy is a nice addition.

Verdict / For a brand new VPN, GhostVPN steals the show. It might just be the most polished new VPN we’ve seen in awhile, and it even outranks some other older VPN competitors in sheer security features and pricing alone (cheaper than ExpressVPN + it has more security features). However, due to it’s affiliation with the parent company being shared with TorGuard, I can’t recommend it over TorGuard. However, it’s still a better choice than most other VPN options due to solid security and speeds.

GhostVPN just launched this week. Curious to see how this VPN stacks up against other newer VPNs like OneVPN and SaferVPN, I dove right in. To my surprise, the experience wasn’t unpolished or missing core features.

Read the full scoop below!

GhostVPN has very good pricing, similar to standard VPN rates. It’s not too expensive like ExpressVPN, but it’s also not as cheap as Private Internet Access. However, the price feels very fair when considering the software features and the amount of servers you get.

Monthly is $9.99, quarterly is $19.99 and yearly is $59.99. GhostVPN accepts all major forms of payment including Bitcoin, and their purchase lag is 0 (when you buy it, you get it, no wait time!). Their payment includes a 15-day refund policy.

GhostVPN accepts all major forms of payment including Bitcoin, and their purchase lag is 0 (when you buy it, you get it, no wait time!). Their payment includes a 15-day refund policy. 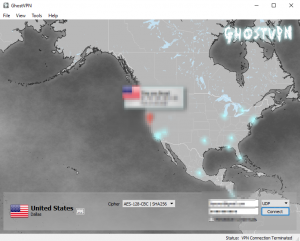 GhostVPN has a great looking software that stands out when a gray and bright teal-blue color scheme. I like the spooky lettering, and the interface of the app is very easy to understand even at first launch.

Finding the settings is also easy, and the various configuration tabs present a TON of options not seen in most major VPN providers that have been operating much longer than GhostVPN.

GhostVPN includes DNS leak protection, kill switches, proxy support, script support, network settings, as well as settings that let you customize how the app launches and behaves. The only other VPN with the same amount of features is TorGuard. 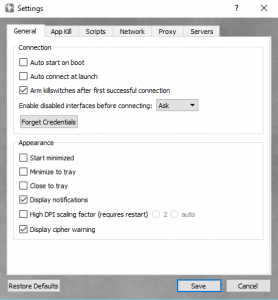 GhostVPN now has a mobile app. It works good, but it’s a bit simple. 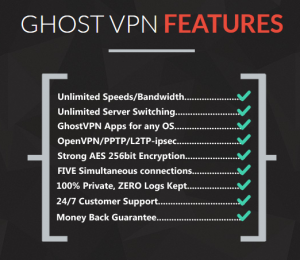 GhostVPN comes with five simultaneous connections as well as good support for censored countries that might need additional VPN protection like their Stealth VPN and Stealth Proxy as listed in their feature set. It’s great to see the ability to customize cipher strength.They also have a freely included browser proxy, but it does have browser caps.

GhostVPN has a website that is organized within one giant page, but navigating the page is intuitive since you can use tabs at the top of the page to navigate to the section you need. The website has a refreshing amount of transparency that a lot of VPN providers don’t provide on their site.

With this site, you can learn every detail about the VPN service like encryption strength, their logging policy, how many connections you get, the refund policy, as well as what protocols you can use. Having everything in one page also just makes it easier since you don’t have to hop around and wait for new pages to load.

GhostVPN has plenty of servers for a new VPN provider. Looking at their list in the client–it seems that they have every base covered. The servers near my location worked quick and connection times were seamless. I’m very surprised here actually since some other newer VPNs like SaferVPN and OneVPN cannot compete at all in this category…

GhostVPN has an air-tight privacy policy that promises that they don’t keep logs of your information. They have beefy 256-AES encryption and other forms of enhanced privacy measures like a stealth proxy for censored countries.

In our speed tests, GhostVPN performed very well. We received barely any latency at all and download speeds were also very quick when torrenting.

GhostVPN doesn’t have live chat at the time of this review, but their speedy response from their ticket system seemed a good indication of things to come. Live chat is coming very soon, as well as the mobile apps.

In this GhostVPN review, we found that GhostVPN enters the competitive VPN field with one of the best PC apps we’ve seen. Fast speeds, plenty of servers, and a website that understands simplicity made GhostVPN a pleasure to not only review, but add to my list of top VPN providers as a possible daily VPN driver.