Bad / LiquidVPN lacks a significant amount of servers to choose from, it doesn’t work with Netflix, it has no mobile app, and the general feeling of the service just feels a bit “mediocre”.

Verdict / LiquidVPN is more than satisfactory compared to free VPNs or other VPNs out there that are buggy, super expensive, and perform badly. However, LiquidVPN, while it does “work” and “gets the job done”, it by no mean excels in any category, making it pale in comparison to some other top tier VPNs we’ve rated here at Best10VPN.

LiquidVPN is not particularly cheap, but isn’t prohibitively expensive either, making its price above average taking into account the competition. The VPN provider has three plans, ranging from $7 to $18 per month. They are the Sidekick, the Road Warrior, and the Ultimate plan. The biggest thing here is to note that LiquidVPN has limited simultaneous connections increasing with the pricing plan. If you don’t need that many, it’s good to see cheap plans, but if you want 5 or more which is standard LiquidVPN doesn’t “fit” right exactly.

The Sidekick costs $7 per month, $4.75 if you choose to pay the whole year all in one payment. With the Sidekick mode, you could have access to 564 of the 2168 IP address of LiquidVPN, and you will be able to connect just two devices at the same time.The Road Warrior, the second in price and quality, costs $10 per month, $5.75 if you choose the annual plan. By acquiring this mode, you would have access to all 2168 IP addresses and connect four devices simultaneously. The Ultimate plan is the best and most expensive of all LiquidVPN’s offerings. With it, you can connect up to eight devices at the same time under the same VPN network, and have all access to the 2168 IP addresses of LiquidVPN. The Ultimate mode is $18 per month, $8.83 with the annual payment.

All three plans come with a seven-day money-back guarantee and the ability to connect to servers from 11 countries around the world. Also, you can pay with credit cards, cash, PayPal and cryptocurrencies like Bitcoin, Litecoin, Darkcoin, XCurrency, and more, giving you all kinds of flexibility when the moment of paying for LiquidVPN services comes. 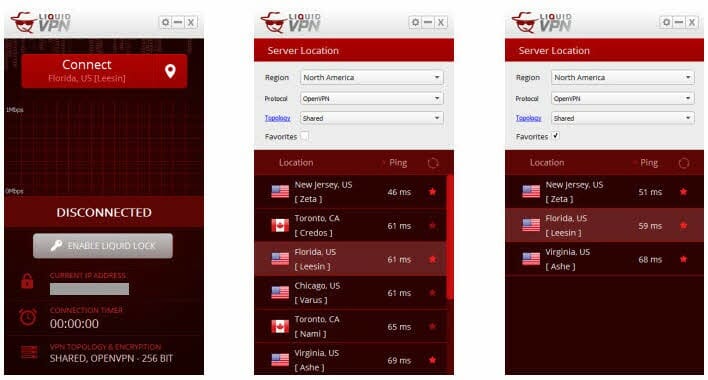 Simplicity is the common denominator when it comes to the download, install and use of LiquidVPN in your personal computer and mobile devices, although it does have one severe drawback: there is no app for iOS as of now, limiting its use for a significant market: iPhone users.

The layout of LiquidVPN is very similar to that of VyprVPN, if not for some minor changes in the color and language (minimal ones, for that matter).The most critical thing for you to understand is that LiquidVPN is very straightforward to install and use. However, it doesn’t have a ton of robust customization or features seen in apps like TorGuard.

You do have various features and exciting things that effectively coexist in your screen: whether you are connected or not, your IP address, your VPN protocol and encryption method used, the server you are currently using, and whether you want to enable Liquid Lock, which functions like a firewall and a kill switch.

The system will show you which servers you can choose to connect from, filtering by region, protocol or topology, which is the type of IP address you implement: shared, dedicated, or modulating, an impressive function that automatically modifies your IP address at previously configured periods of time. You can access the various features and sections of LiquidVPN with no issues whatsoever: settings, support, and feedback. There is, however, no button to return to the main screen to the available servers display.

With a somewhat archaic font and a long page that requires users to do lots of scrolling just to find features and company info, LiquidVPN’s website can be considered a little heavy for proper navigability. You can see a good about of information as you scroll down though.

You can have access to files you have downloaded, customer service, the control panel and settings section, and the dashboard. A ‘warrant canary’ letting you know that LiquidVPN hasn’t been contacted by governmental authorities or your Internet Service Provider wanting to see your logs or activity is also visible.

The only differences between LiquidVPN’s three pricing plans are the number of IP addresses available, the cost itself and the number of simultaneous connections allowed. It’s weird to see the option to get 8 simultaneous connections, but be charged more for it. However, that option is there. Other VPNs give you 5 included, and let you pay for more as an add-on if need be.

One of the most widespread positive characteristics of LiquidVPN is the ability to acquire a modulating IP address. With it, LiquidVPN will assign you a different shared IP address for specific periods of time that you will choose in the settings. That system, unique as of this writing, helps to boost your anonymity.

Besides a few rinky dinky features inside the app with fancy names, Liquid VPN is pretty sparse on extra features. LiquidVPN does not work with Netflix in our tests, even if we specifically followed the instructions. They also don’t have a chrome extension, a mobile app, or much else that interests me as “extra” features.

LiquidVPN: the client delivers in all the mentioned fields, with excellent grades in some of them. The big problem with this up-and-coming, US-based VPN service provider is the limited number of servers that it has available for its customers.

LiquidVPN has a total of 2168 IP addresses, with servers in 11 countries. That number pales in comparison with other top-tier or even mid-tier VPN clients in the market these days, and as time goes by, LiquidVPN will need to increase the total to more competitive levels.

As a VPN based in the United States of America, that is the country in which LiquidVPN has the most servers, along with Canada; thus establishing a local, North American market before going to international locations.

Along with the US and Canada, LiquidVPN also has servers in the United Kingdom, the Netherlands, Germany, Sweden, Spain, Switzerland, the Czech Republic, Romania, and Singapore. Latin and South America, Asia, Australia, and Africa represent largely uncovered markets, and this client could use some more nations in Europe, as well.

For starters, the client works with the ever-effective 256-bit AES encryption, making sure your traffic, data and IP address are secure. The app and the software for Windows, Mac OS X, and Android let users choose the encryption protocol for VPN protection of their data and online assets. They can choose among options such as OpenVPN, SSTP, PPTP, and L2TP with Internet Protocol Security (IPSec).

Also, LiquidVPN offers another trait: the perfect forward secrecy, a feature that safeguards your past sessions against the threat of leaving passwords or keys unprotected and at the reach of a third party. LiquidVPN has a no logging policy to help users achieve the kind of peace of mind that they are looking for when they hire a VPN service provider. However, they keep minimal metadata logs, for example, the bandwidth you implement, the number of times you connect with your VPN, and such things, but not your IP address or time stamps.

People are always aware of the law enforcement situations in which the US government may ask the client for logs or any other kind of assistance, but LiquidVPN claims to delete all logs and transactions of their customers as soon as their session finishes, so you don’t have to worry about that.

With LiquidVPN, the speeds will be “just” acceptable, but it will not reach the level of some of the fastest VPNs obtainable right now. However, you could torrent, share P2P files, download, and stream with the green light. With more servers to choose from, we might see better speed results.

LiquidVPN has an inefficient customer service and support. If you are using the app, you can access the support team by leaving a message to a form. After you do that, the VPN client will inform you that your ticket for help is now active, and you can monitor its status if you go to the “My Support Tickets” in the dashboard. In general, the average time of response is short, usually less than an hour.

The previously mentioned steps are the whole customer service that LiquidVPN has functioning to help its customers in the case they have an issue or problem while using the software or the app. Remember, this is a relatively new client, so the (not-so) little details such as support remain undeveloped as of now.

However, the need for growth in the support service is evident. People with urgent issues don’t have the chance to communicate to an efficient customer service, either via regular phone or live chat, leaving email and tickets as the only choices for help.

LiquidVPN uses military-like encryption with the always efficient 256-bit AES encryption, and it lets customers choose their most convenient security protocol. However, their main website is a bit plan, the extra services are lacking, and there isn’t much about LiquidVPN to make it stand out.

The speeds tests were OK, as LiquidVPN is useful for sharing P2P files, downloading big files and stream online content from the comfort of your personal computer or device, be it Windows, Mac, Linux, Android and even iOS, although for the latter, you will need aid from a third-party app. But most VPNs can achieve these results, so these “OK” speed tests don’t really warrant a valid recommendation.

The main drawbacks of LiquidVPN are its mediocre customer service and support and the lack of servers and countries to connect. Regarding the former, the client answer emails fast and efficiently, but has no live chat or even phone communications with help agents. When it comes to servers, LiquidVPN doesn’t reach 50, and you can only establish connections to eleven countries, severely limiting accessibility of international sites.

Overall, LiquidVPN isn’t the worst VPN out there. It does work fine, and it has the mandatory security features you need. However, besides a useable app and a semi-decent pricing scheme, there aren’t fast enough speeds, unique customization options, or servers to warrant my interest for long term use.