Doesn’t VPNBaron’s logo remind you of breaking bad? There’s just something about their logo with the mustache and the hat that reminds me of Walt. I wonder what the effects would be if they carried that theme across their whole site. To be honest, a lot of it is light blue…

VPNBaron is a smaller VPN service that has been garnering our attention of late since they claim to work with Netflix. (Check out this article here for more immediate information on that.)

Breaking bad logo aside, does VPNBaron have enough to stand up to the big boys of the VPN world? Or maybe it’s just another small VPN without sufficient resources to deliver high speeds, customer support, and reliable application performance.

Read our full VPNBaron review below to find out! 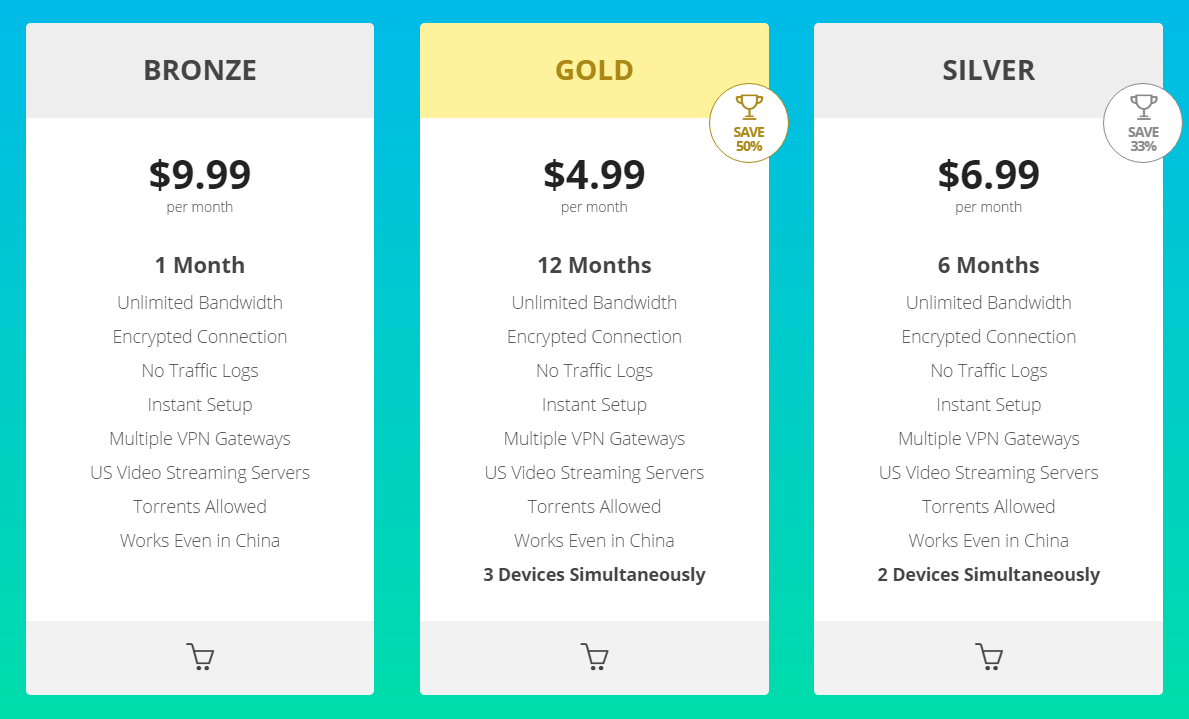 VPNBaron has a standard $9.99 one month cost, a $60 price tag for an entire year, and a $42 price tag for half a year. Each one of these pricing models comes with the same features intact, but the yearly model includes three simultaneous device use, the half year two, and the basic model one. It’s quite lame here that they limit so many devices since competitors like TorGuard give five simultaneous devices for the price of VPNBaron’s Bronze model.

Probably the worst thing about VPNBaron’s pricing is that you can only pay half year and full year with Bitcoin. Limiting Bitcoin payment like this is plausible for VPNBaron (but annoying for customers) because it’s a bit trickier to get customers to pay month to month with Bitcoin–so they are funneling you towards higher investments and more revenue return.

With Paypal or credit card, you can still purchase one month since it will function as a recurring payment. VPNBaron also does support other forms of cryptocurrency besides Bitcoin, which is nice to see.

While filling out your payment plan, you also need to provide tons of information like your address which is a bit annoying. This is usually required only for Paypal or a credit card–not Bitcoin transactions.

VPNBaron claims they offer a no hassle seven-day refund policy. I’ll update the support section if it’s as good as it sounds.

VPNBaron does not include Bitcoin refunds.  “We offer a 7-day money back guarantee for new subscriptions, except for subscriptions purchased by Bitcoin payment methods which cannot be refunded.” Their reasoning behind this is that “as you may know from the other services in the VPN industry that accept bitcoins, digital currencies are not refundable.” However, this is NOT true. We’ve gotten tons of Bitcoin refunds.

My final complaint with VPNBaron’s pricing is that if you pay with Bitcoin, it will take a while–since their Bitcoin merchant takes forever to verify invoices. It took around two hours for my invoice to process, and then another half hour for my account details to be sent from VPNBaron. 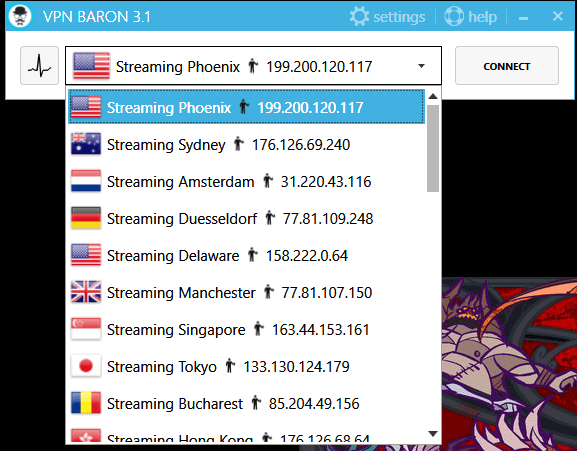 VPNBaron has a very barebones software. There is an option to show logs, but if you don’t do so, the client is barely a few inches long on the screen. You have some settings, various server options, and then the ability to connect.

When you navigate to settings, you’ll find some useful options like the changing UDP or TCP, the ability to change how your TCP connection appears, or the option to force DNS and of course–a kill switch. 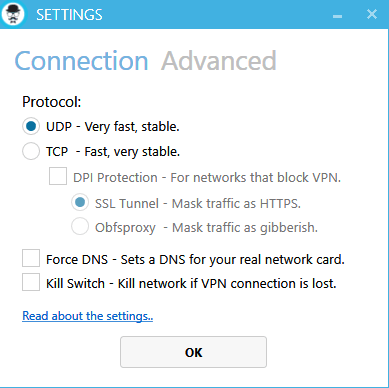 It’s nice that VPNBaron has included a kill switch and the ability to force DNS. I would like to see a few more options like IPv6 leak protection, cipher customization options, or even the ability to change protocol (L2TP, PPTP, etc.). Options here aren’t too advanced, but the core essentials like a kill switch are present.

Switching servers is very easy, and it works well since you can change from server to server without disconnecting–however, there is no option to favorite servers to make them easier to locate in the list. Most other VPN providers have this neat little feature.

One thing I didn’t like about connecting to servers is that upon connection VPNBaron automatically hides and closes down. I would have preferred some option to tweak this behavior in the settings.

Connection times are fast, and I encountered very little hiccups during use or installation. Overall, VPNBaron’s app is subtle, light, and simple–but it’s entirely sufficient for basic VPN use.

VPNBaron doesn’t have a native mobile app yet, but you can try using OpenVPN. Maybe they will develop an application later on like some other VPNs we’ve reviewed. For a good mobile VPN app, check out TorGuard or ExpressVPN.

VPNBaron just offers core VPN services as well with Netflix. They don’t have anything additional to make themselves stand out besides VPN. Working with Netflix is quite a feat at this point, giving VPNBaron some extra points.

If you need additional services like Stealth Proxy for China, dedicated IPs, encrypted email, mobile apps, or even browser extensions check out a VPN like TorGuard. 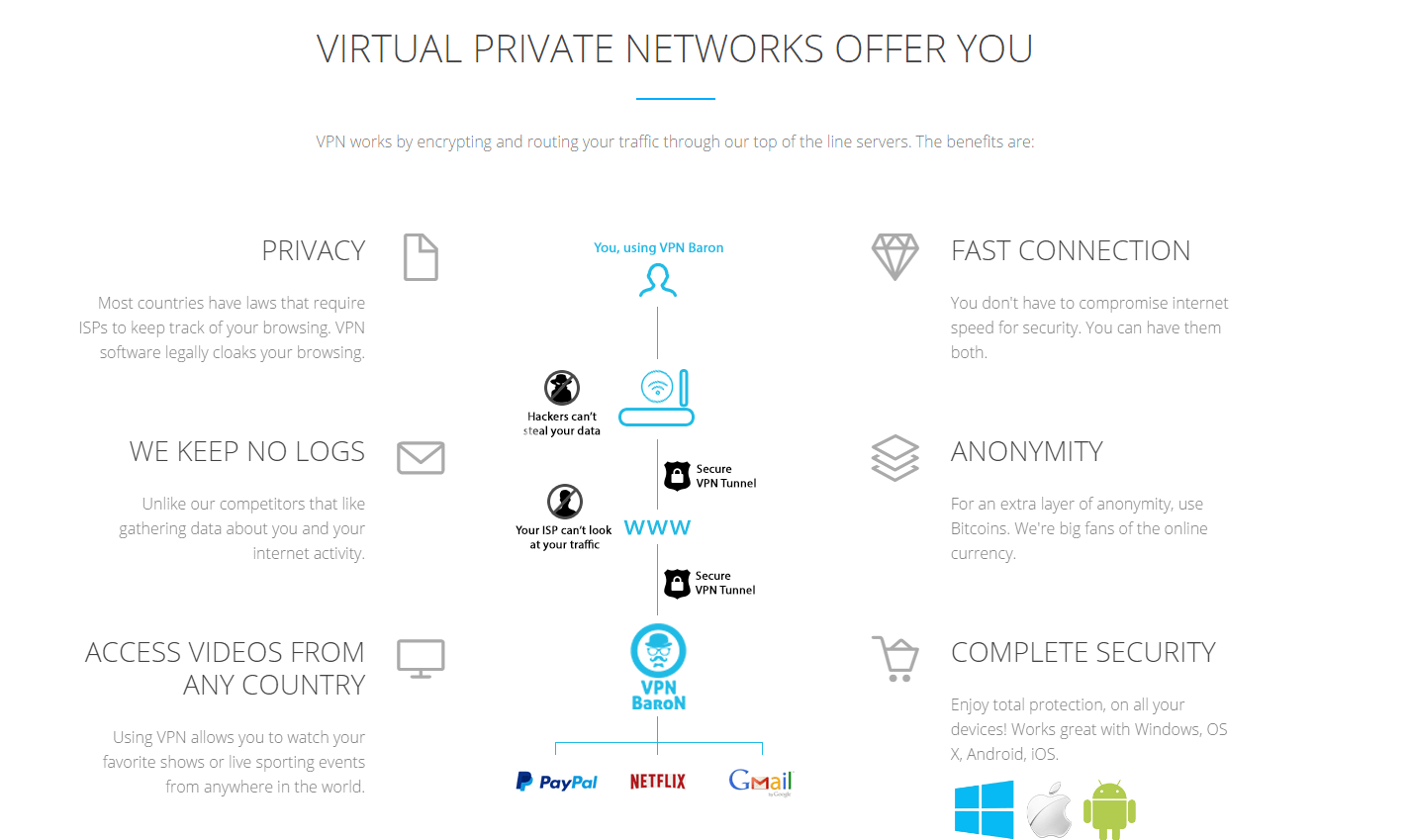 VPNBaron has a decent website that works primarily as one single page with features and options about the VPN displayed clearly.

The members area is easy to navigate as well with products active clearly seen. However, as I noticed in the pricing section, I did not like how long it took for their servers/site to register my payment and service active.

VPNBaron has a decent amount of servers available with a good variety of US servers, as well as servers around the world. Servers I tested worked well and connected fast.  Here is a complete list of servers:

VPNBaron claims they don’t collect any logs. For client use, they have OpenVPN as their primary protocol. Their encryption is 256-AES with a 2048-bit RSA key.  This is excellent for security.  They’ve recounted how they haven’t had any issues with DMCA or subpoenas in the past.

“None of our users ever received a DMCA notice while connected to our service, being unable to detect the source user, due to our no traffic logging policy. On our end, we have an internal procedure for dealing with the DMCA claim that goes unnoticed to our users.”

“No subpoena have been received by our company. If it happens, we’ll be sure to assist as much as we’re legally obliged. Keep in mind that we don’t have any information stored about our users, except their login credentials and a few support tickets, stored in our client management platform.”

Overall, VPNBaron might be perfect for streaming videos or browsing, but if you need quick downloads, you might consider checking out TorGuard or ExpressVPN.

For being a smaller newer VPN, VPNBaron has decent customer support response times. They don’t have live chat like some VPNs we’ve reviewed, but when we sent a message to them, they responded within an hour. Their support pages are also fairly decent and well organized on their support section of the website.

However, not having live chat means you will need to wait for every time you have a problem and on off-hours, these wait times will inevitably be longer.

VPNBaron is a new entry to VPN this year, and for the most part, their service is quite good. While it lacks some of the extra features and super quick download speeds we’ve come to expect from some similarly priced VPNs, as well as live chat, and a mobile app–VPNBaron succeeds by making a very user-friendly VPN application that connects quickly, has great fundamental encryption and security, works with Netflix, and provides decent browsing and streaming experiences.

Thanks for reading our VPNBaron review! Let us know if you have comments below.