With each passing second, it becomes more evident that the Internet isn’t the same place it used to be fifteen or twenty years ago. Not only it is clear that you can find lots of additional options and sites than those you could enjoy a couple of decades ago, but also, it is far more vulnerable and unreliable nowadays.

Hackers are always lurking around, and they are more skilled, prepared, and resourceful than those that made their day twenty years ago. Today, we have to worry about malware, ransomware, man in the middle attacks, DDoS attacks phishing attacks, scams, crypto mining, fraud, cybercriminals, and all kinds of threats. Every step we take on the web can be heavily spied if we don’t know how to protect ourselves.

One of the planet’s most successful operating systems is Android. The Google-developed product is slick, smooth, and is full of exciting tools and resources that can help us not only organize and sort of assets, but also gain access to the web, download apps, and services, and perform lots of other things.

However, Android is far more vulnerable than some of its direct competitors, including iOS. The operating system makes people especially prone to data-logging, spying, and traffic sniffing because, naturally, its roots are related to Google, and Google is, despite all of its success and worldwide fame, one of the most privacy invasive companies on the web.

Fortunately, VPN technology exists as a way to protect our Internet interactions from the claws of data-logging Internet Service Providers, hackers, governments, advertising companies, and other agents. In this article, we will discuss the best Android VPN apps in 2019.

What is VPN technology?

Android users need to securely connect to public Wi-Fi and protect their data while they are there, as well as changing their IP address with the intention of gaining unrestricted access to streaming platforms, sites, and services that are geo-blocked if they so desire.

Users can achieve those things and more with VPN technology. VPN means “Virtual Private Networks,” and they are incredibly useful online resources that allow the person to hide their traffic and location information (shown by its IP number) to earn protection against dangerous agents on the web.

Nowadays, and especially on Android, people have to fight data-logging Internet Service Providers that threaten to undermine their privacy. Not only that, but the web is full of hackers, cybercriminals, malware developers, copyright trolls, crypto miners, and other dangerous agents, and a VPN will help you hide your activity and identity to avoid any contact with them.

These apps manage a list of servers attached to IP numbers from different countries. To unblock content in a specific nation, you need to join a server from that area, and all local pages, sites, streaming platforms, and services will immediately become available.

VPN technology creates a virtual tunnel for the user’s information, traffic, connection details, and location data to pass through, protected from any external agents. The VPN app will manage connection requests, relaying the person’s information to the web under a different IP address.

The TorGuard Android app helps you turn your phone into the center of all your universe: you will browse the web anonymously while you pay your bills in your banking account, watch the daily news, play games, stream movies, and other activities.

For Android users, it is vital to keep information away from snoopers and spies, because they can use that data against you at some point. TorGuard has a dedicated app for Android, with all the menus, configurations, and options easily reachable.

The American brand has more than 3,000 servers in 55 nations around the world, one of the broadest networks in the industry. Additionally, it has the traditionally used protocols and some rare ones: users can choose between IPsec, IKEv2, OpenVPN (TCP and UDP,) and Anyconnect/Openconnect.

Encryption in TorGuard’s Android app is of the AES 256-bit variety, one of the best available. The no-logging privacy policy makes sure to stay true to its word, and the Stealth VPN feature is perfect for bypassing even the strongest firewalls.

You can find the app on the website and via the Google Play Store. The company allows full torrenting activity, has optimized streaming servers and costs no more than $10 per month. You can find guides about the installation and setup process in numerous platforms and devices, and a live chat feature is also ready to help you for more urgent matters. 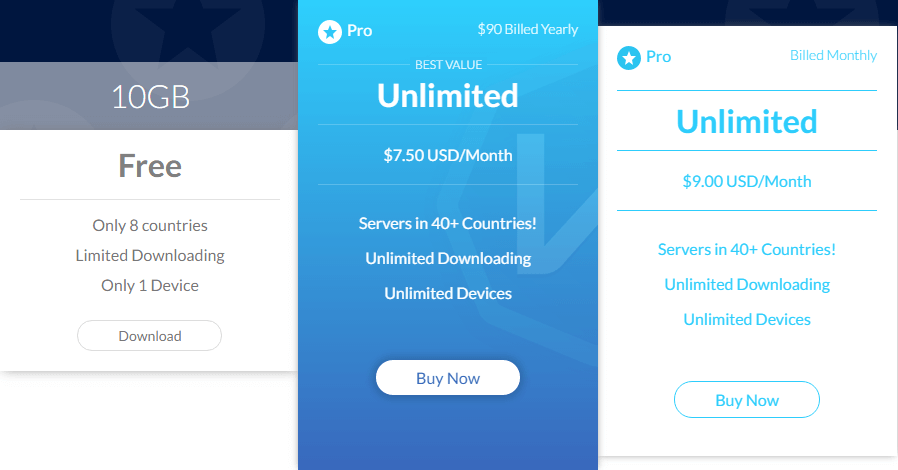 Android users can also enjoy Windscribe, as it is among the best VPN Android apps to use in 2019 and beyond. The best part is that the service is free, and unlike other similar alternatives, it is more than worth your time.

Despite being free, it offers a very user-friendly data cap of 10 GB per month, unlike other brands that top at 500 MB or 1 GB of unrestricted use, making specific activities, such as torrenting or streaming, virtually impossible.

The Windscribe Android app is easy to get, install, and use. All you need to supply is your email address, and from that point on, your data, traffic, and identity will be protected at all times as long as you are connected to a VPN server.

The option is quite straightforward, with no confusing configuration options or menus. All you need to do is turn it once, and that’s it. Windscribe is also available on iPhone, iPad, Mac, Windows, Chrome, Firefox, and Opera.

Windscribe’s Android app has exciting features, such as network whitelisting, which is an auto-enable/disable VPN option when you get home or join any other wireless network. The free version has servers in 10 countries.

If you want the pro version, you need to pay $49 per year ($9 per month if you choose the traditional way.) However, it is way better than the free one, as it has no data caps, over 500 servers in 55 nations, OpenVPN, IKEv2, SOCKS5; and ad, trackers, and malware blocking.

Windscribe is compatible with Android devices that run the version 4.2.2 or newer. The default protocol for the Android app is OpenVPN, one of the safest around. The Windflix offering lets you stream Netflix smoothly.

If you find the first two options in this list helpful, but expensive, here is a “budget” VPN with similar features: Private Internet Access, often shortened to PIA. The standard monthly plan costs $6.95, but the prices can get as low as $2.91 if you choose the two-year plan.

PIA offers a full, no-hassle no-logging policy to protect your privacy, as well as the military-grade AES 256-bit encryption that is so sought-after in the industry. It provides a secure VPN account, encrypted WiFi, P2P support, a wide array of protocols (PPTP, OpenVPN, and L2TP/IPSec,) five devices simultaneously; ad-trackers-malware blocking, multiple VPN gateways, unlimited bandwidth, a SOCKS5 proxy, and is very straightforward to install, set up, and use.

PIA has more than 3,245 servers in 33 countries and counting! The design of the Android app is not the most intuitive in the field, but it fulfills the promise of privacy and unblocking capabilities that users seek for a fraction of the cost they would pay for similar alternatives.

It works for Android 4.1 or newer versions of the operating system, and the app uses the OpenVPN as the default option. A single tap is enough to connect, and the interface shows other menus and configurations as well. It has several features (a dark mode is one of them, which is cool) but needs to do a better job integrating those offerings. Region selection, Automatic connection, split tunneling, and a kill switch are some of them.

In conclusion, Android is a somewhat vulnerable operating system that needs all the privacy-enhancement tools you can deploy. VPNs remain among the most efficient security measures, and TorGuard, Windscribe, and PIA are the best VPN Android apps for 2019.