If you love Bitcoin and want to add even more security to your transactions and network, you might want to consider using a VPN. But why?

VPN stands for virtual private network, and VPNs are great for securing your network traffic. Bitcoins are a great currency to secure your payments without the oversight of large corrupt institutions with ulterior motives.

However, do you need both or one or the other, and what advantages do these two tools bring to the table when used together? How can both Bitcoin and VPN work together to enhance your operational security?

Why Use VPN with Bitcoin?

Bitcoin is a great currency. It’s remarkably transparent, and it’s creation has the oversight of great developers. And perhaps best of all, at its core, no one controls it.

It’s great to use since you can pay for something and not have your personal information attached to it. You don’t have to provide personal details like billing name or address. This makes Bitcoin a valuable tool when paying for specific online items or services.

When you initiate a transaction on your computer, your Bitcoin client sends the data to other clients to complete the transaction. Your IP would be exposed when logging into online wallets, like blockchain, buying stuff with Bitcoin processors like Bitpay, or it could be compromised on the Bitcoin network or via third party Bitcoin servers similar to those used by electrum.

Since Bitcoin doesn’t encrypt traffic, this means that your internet service provider, the owner of the public Wi-Fi hotspot you are using, or agencies like the NSA can track down your transactions. In fact, in a lot of cases, sophisticated third parties can gather a large amount of data from transactions to reveal Bitcoin users.

Unfortunately, an IP Address can give away plenty of information, like where you are located in the real world. Most of Bitcoin’s weaknesses have to do with how it’s not very anonymous in one way or another. For example, if someone gives out their transaction ID to receive Bitcoin, other users can see the activity. This is why it’s best to use different receiving addresses with every transaction.

Using a VPN when you conduct Bitcoin transactions will not only give you a new shared anonymous IP that will be logged with transactions (thus hiding your REAL IP), but it will also encrypt all of your outgoing traffic in the process meaning that any snooper or agency can’t steal information about your Bitcoin usage. If you are trying to keep your Bitcoin usage and browsing secure when accessing online wallets, a VPN will be needed.

You need a VPN that accepts Bitcoin in the first place. I would only really recommend TorGuard since they don’t keep logs and support almost any cryptocurrency out there.

Why Doesn’t Bitcoin Encrypt Transactions Then?

The lack of anonymity is also a good thing for Bitcoin in certain forms to prevent criminal activity and provide accountability on the network, as well as to prevent fraud, but there isn’t much anonymity when it comes to Bitcoin if you aren’t using a VPN.

Every transaction can be traced back to its root, which is unlike some newer cryptocurrencies like Zcash or even Navcoin which uses other methods that let users hide transactions if they want to.

How to Buy Bitcoins Securely

If you want to buy Bitcoins online and remain anonymous, you are out of lock since most currency exchanges like Coinbase require personally identifiable information like a driver license or SSN to prevent fraud. However, just because you purchase Bitcoin this way, doesn’t mean that when you send Bitcoin around you can’t mask your IP and traffic in the future.

However, if you want to go the extra step to purchase your bitcoins in an anonymous fashion, you can meet other Bitcoin users in real life through services like LocalBitcoins or other Bitcoin trading sites. Don’t provide any identifiable information like your name, email address, phone number or address during these exchanges.

How to Store Bitcoins Securely 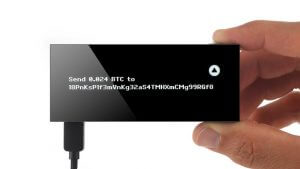 The best method to store Bitcoins securely is to use a Bitcoin hardware wallet. The reason is that if you store  your Bitcoin on a hardware wallet that doesn’t have an operating system, your money can’t be stolen or hacked.

Bitcoin hardware wallets are very easy to use and not very expensive, but they are by far, the best method to storing and securing Bitcoin with a VPN.

If I were you, I’d use Keepkey. Here’s a good KeepKey Review.