What is WireGuard? Today we are here to answer that question. Whether you are a VPN beginner, or VPN master, WireGuard can be a useful future improvement to your VPN needs. Firstly, we must outline what a VPN is to understand how WireGuard affects it.

Disclaimer: WireGuard does not have PC support yet. The creator of WireGuard does not suggest using any of the available methods until one is released. So, for now the best way is to run on Linux, or directly on a VPN router. You can also test WireGuard on iOS or Android, or the newly released Mac client as of 2/2019.

Today we will cover and answer these questions:

2. What do VPN protocols like OpenVPN, IPSec/IKEv2, and WireGuard Do?

5. Which are the Best Cheapest VPNs that Support WireGuard?

What is a VPN?

VPN stands for Virtual Private Network, and essentially what is a protocol that reroutes your internet data through a secure virtual tunnel, that connects your computer to a remote server. How can we explain VPN in terms of an easy non-techy explanation?

Think of your foot as your computer, the sock as the VPN, and the shoe as whatever online activity your connected to. By wearing a sock, or using a VPN, your shoe is so much better. Sure, you can use a shoe without a sock, or use the internet without a VPN, but it’ll be uncomfortable experience. If you don’t wear a sock–a VPN, you’ll have some bad side effects like fungus or sweaty feet (privacy and data leaks for example). Why use a shoe without a sock if they are inexpensive, easy to use, and comfortable?

Well just like a sock, VPNs are hardly inconvenient, in that you have to turn it on (put it on), but that’s it! By using a VPN, you can make your internet experience a better experience. People use VPNs to protect their data in Wi-Fi cafes, to protect their IP while torrenting, to get around Geo-restrictions enforced by streaming sites (many streaming sites are only working if you are within the United States–or have a US IP), or a plethora of other reasons.

What do VPN Protocols like SSTP, PPTP, IPSec/Ikev2, OpenVPN, and now WireGuard Do?

Some protocols like PPTP are very old, and not very secure at all in the current operating system / internet age. Back when Windows XP was around, PPTP was decently secure. But now with Windows 10 and newer Macs and Linux, the most common protocols used on PCs are OpenVPN, and the most common protocol used on smart phones is IkeV2. OpenVPN has largely been recognized as the best blend of security and speed, whereas Ikev2 is used for smart phones since it’s fast, and there is licensing restrictions from the creators of the OpenVPN app / protocol on the iOS store.

So while we can understand that OpenVPN is the main player in the market right now, developments in WireGuard are fast becoming more attractive, which means that it could unseat OpenVPN’s place as the “VPN Protocol King.”

What is WireGuard? How is it Different from Other Protocols?

WireGuard is more succinct and not bogged down by code. It’s a new modern protocol that has compressed and input technology to make it “smaller”. OpenVPN has around 100,000 lines of code, and 500,000 lines of code dedicated to OpenSSL encryption. WireGuard, on the other hand, only has around 4,000 lines of code. With fewer lines of code, it’s easier to find bugs, vulnerabilities, and it has fewer crashes and bugs. WireGuard’s small amount of code means that it’s also easily compatible and fast to use on smart phones.

It’s a modern and simplified VPN protocol, made for the things that we do in the modern age. This means that WireGuard, in a way, is made for gaming, video streaming, and other data-intensive needs. However, WireGuard also has good security. It uses a new process called “cryptokey routing” which is used to protect user data. This method couples together public encryption keys with authorized VPN tunnel IPs. WireGuard also doesn’t use old or outdated algorithms either.

WireGuard’s smaller code base does have a few caveats. While OpenVPN supports encryption all the way up to RSA keys up to 4096-bit, WireGuard only supports up to  256-bit encryption means that it doesn’t technically reach as high as security. But, 4096-bit keys are a bit overkill, and would mean a speed loss–so for nearly everyone, the advantages in terms of a smaller code base means less bugs and more security and speed, and due to modern implementations of cryptography and giving the “boot” to old algorithms, WireGuard is fast becoming the newest best VPN protocol.

-Easier to change and keep track of code to smash bugs and vulnerabilities, or to make improvements.

-Faster than other protocols, especially for smartphones since it uses new cryptographic methods and it lives inside the Linux Kernal.

-No PC App yet, only supports smartphones.

-Not fully developed which means use case is small still and code could have security vulnerabilities since no version “1.0” isn’t out yet.

-Not advisable to use except for testing since still being developed. OpenVPN is more trusted and secure at this point for a number of years.

-Some reputable VPNs like AirVPN have questioned and refused WireGuard until it’s a finished product.

Should You Use WireGuard? 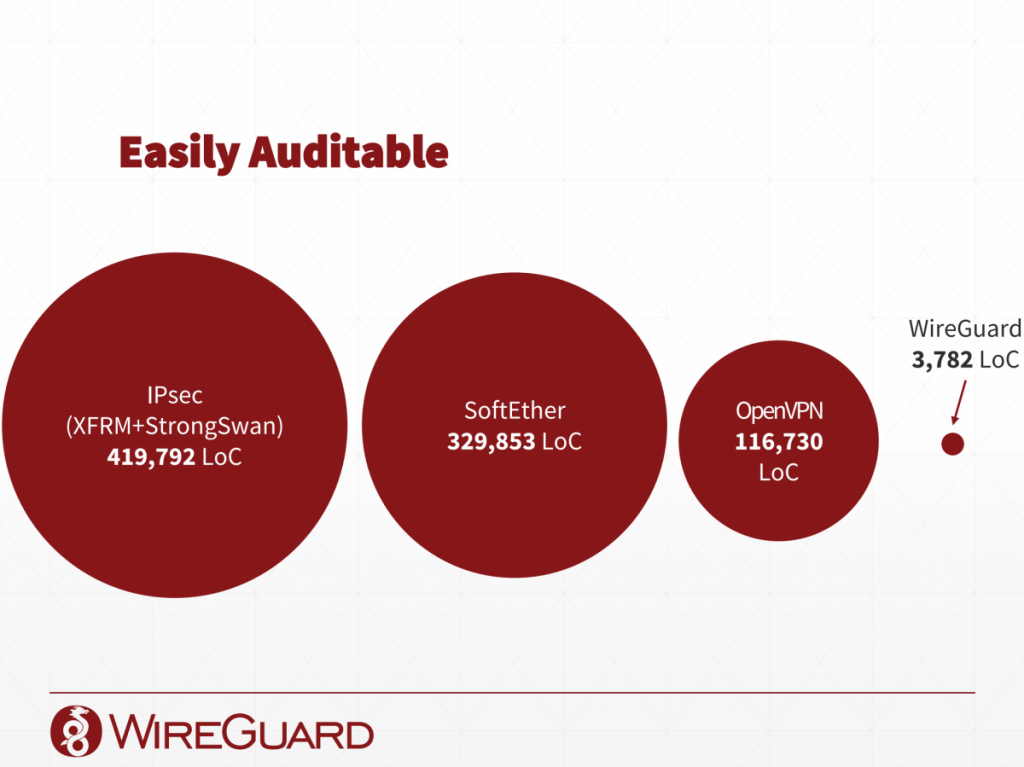 Small graphic showing that older protocols have large amounts of code, which make them hard to audit.

If you want to use a PC VPN, then probably not. However, if you want to test out the new tech on your phone, Linux, or router, then perhaps you should.

OpenVPN has long since been the golden standard in the VPN industry when it comes to protocols. OpenVPN was released in 2001, and it has a long track record of success and multiple security audits (one such in 2017 from the Open Source Technology Improvement Fund) over the years since it was released. While some WireGuard supporters critique OpenVPN for being outdated and old in terms of the code and design, many others  think that OpenVPN still very trustworthy and proven as reliable as a currently used protocol.

WireGuard is not ready yet for full deployment, and can’t compete with OpenVPN’s track record. However, in the future, who is to say that the cleaner code wouldn’t provide for a faster experience that is just as secure–or secure enough?

Unfortunately, not every VPN provider provides WireGuard access, and those that do, are definitely not equal. We would recommend picking a VPN that works well with OpenVPN, and lets you also test WireGuard. That way you can test WireGuard, then go back to OpenVPN if you want! In our VPN tests, the fastest VPN and cheapest VPN for WireGuard testing is TorGuard. You can use TorGuard with WireGuard on iPhone or Android by downloading the WireGuard apps. We’ll show you below!

Additionally, we recommend picking a VPN service that sells routers, since it can be tricky to flash a router yourself. Also, you need a good Linux based VPN (since Linux is supported but Windows is not). TorGuard not only is fast and cheap, but it also sells VPN routers that will work with WireGuard protocol, and it also supports Linux (awarded best Linux VPN by a few other sites).

You can get TorGuard with WireGuard access for only $5 a month with code “Best10VPN“. This is the cheapest VPN offer that will get you WireGuard access. Now in terms of every VPN that supports WireGuard testing, you can also find solutions with VPNs such as AzireVPN,MullVad VPN, IVPN, VPN.ac, and PIA.

However, these listed VPNs don’t have as fast speeds as Torguard–or live chat or as good of documentation to help you setup WireGuard, so we wouldn’t recommend testing out WireGuard or using these VPNs with it unless you already have a subscription with them already.

How to Use WireGuard with TorGuard?

We would suggest using WireGuard for Smartphones, or Linux. There are also ways to use it on your VPN router, and there are guides for setting up WireGuard on OpenWRT routers here on the OpenWRT Wiki. We haven’t fully tested WireGuard on routers and we might put out more tutorials in the future, but for now, the Wiki should be good enough for power users. For phones, we’ve tested WireGuard and found it fairly useable, since it’s actually very easy to setup.

First make sure you buy a VPN subscription that supports WireGuard (in this case TorGuard VPN since it’s the cheapest), and then download the app you need below!

You can get your Public Key and Private Key to enable the server by going to TorGuard’s Account panel, then go to “Tools” then you can “Enable  WireGuard”. The easiest way from here, is to “download config” file. I would do this on your computer, and then drag and drop that file into an email. From here, email the file to yourself, and open up the email on your phone. From here, you can open the file, or “copy” to WireGuard’s app, and the config file will load in the proper settings. I tried to do the custom way, but it wouldn’t let me enter in two separate keys!

And that’s it for using WireGuard! It’s very easy to use on smartphones, and the Mac process is similar since it’s an app from the store. PC support might be coming soon! Linux support / installation can also be found on the main WireGuard installation page.