Zenmate VPN is not a bad VPN, but it can’t go stride for stride with the best of the best. With a decent pricing scheme, fair speeds, and an OK app–it gets the job done well, but it doesn’t excel.

Zenmate is a VPN based in Berlin, Germany. The app is customization to extent with various languages like German, Turkish, Korean, Russian, or Spanish, as well as English.

The service prides itself on offering both a browser based proxy app alongside it’s main VPN downloadable application.

Like all VPNs, they claim blazing fast speeds, the best security, and everything else that you would need. The question is, does Zenmate deliver on all fronts? Lets find out in this Zenmate 2017 review.

Zenmate has a fair pricing model, if not something spectacular. It’s not as pricey as ExpressVPN or AnonymousVPN, but not as cheap as Private Internet Access. The one month subscription of $8.99 is cheaper than TorGuard (our best rated VPN) and IPVanish which are both $9.99 a month, but the 6 month plan of $44.99 is more expensive than TorGuard’s $29.99 6 month plan.

The yearly plan is much cheaper than some VPNs which retail at $99 but for $59.99, we think it’s a fair but standard price. The service comes with a free 7 day trial which is nice, and it comes with a 14 day refund policy.

However, no anonymous payment solutions like Bitcoin, Litecoin, or Monero are accepted. To see the best anonymous VPN payment accepters, check out this article on how to buy VPN anonymously.

Zenmate VPN’s software is fairly standard. It uses the more minimalist approach, similar to Private Internet Access. The app loves to hide in the task bar of Windows, which  I find a bit annoying. Any time you sort of get outside the app, it just minimizes itself into a little icon. I think the reason is that Zenmate VPN wants you to forget that you are using the app. If that sounds OK, then by all means you will love how it behaves. However, I like to keep tabs on my VPN to see how it’s operating and that its still active, so I find the app behavior a bit annoying.

Everything else about the app is ok, however. Using it is easy with menu icons on the bottom giving you access to settings easily, account information, and it’s also easy to navigate and favorite servers. Connecting is also very simple and quick.

Configurable settings are decent with a kill switch available and DNS leak protection, and a few other options like controlling how it starts on windows startup, but I was disappointed not to see more transparency like what type of encryption is enabled or any options to configure protocols. Additionally, it’s missing some advanced power features like we’ve seen in VPNs like TorGuard which give you script control, dedicated IP address integration, stealth VPN settings and other features.

Overall, Zenmate VPN’s app is simple, but it’s easy to use and gets the job done. 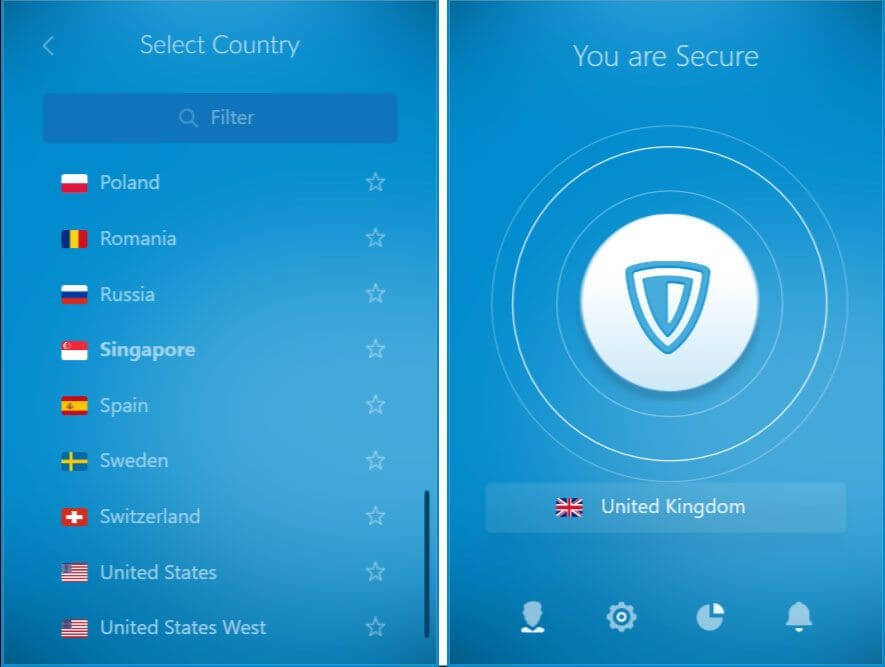 Zenmate does have an iOS and Android app which is good to see. The reviews are OK, the team updates the app pretty frequently, and our experience was decent. The app mostly functions like the PC counterpart, and gets the job done. 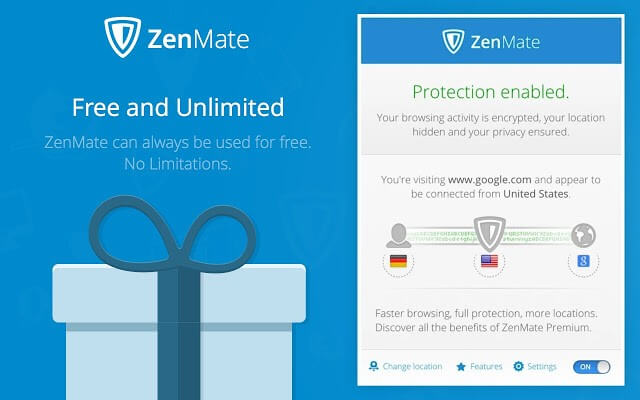 Zenmate VPN offers their “VPN” service as a browser proxy. It’s not a full fledged VPN service for your browser, but it works as a decent proxy to hide your IP and thus your identity without encryption. Their desktop app is a full VPN service.

Besides that though, there isn’t too much here. It’s a basic VPN offering alongside their browser extension. They do offer 5 simultaneous connections,however, which is decent and not too stingey.

If you want things like encrypted email, company sold VPN routers, Stealth VPN services, a freely included torrent proxy, or advanced power VPN features within an app, check out some other VPNs.

Netflix was not working in our tests with Zenmate VPN

Zenmate VPN’s website is fine at first glance. It’s nothing flashy, or annoying, but a lot of it feels a bit lacking when you start looking for details. What type of encryption do they use?  What services do they provide?

These answers aren’t on the front page in a nicely organized chart, like what we’ve seen with VPN providers like GhostVPN.

Not only that, but I  couldn’t find that detailed of a FAQ to answer these questions and the website is missing a blog with news and a forum community. Other bigger VPN providers have these things, as well as more information about their services, so Zenmate VPN has some room to grow I think.

I’ve seen a few other reviews on Zenmate having  unnecessarily critical opinions (or perhaps simply outdated) of their site. It’s easy to find their support in the top menu, and checkout works well. Getting a trial is also very easy since you can just download the app and it works that way.

Zenmate has a smaller selection of servers than I’m used to but most of them seem workable and give decent speeds upon connection.

Zenmate VPN needs more information on their encryption rates. Without that information, it’s just heresay discussing what encryption they use.

From my analysis it seems like they do use OpenVPN and AES-128 on their main app which is serviceable. However, the app needs more controls to give the user access to change UDP/TCP, and encryption rates as well as protocol control.

If I were to be impressed with one area of Zenmate VPN, that would be the speeds. The speeds from Zenmate were surprisingly decent for streaming and media browsing with low ping and a decent download/upload rate. However, for torrenting I was limited to 5 Mbps or so which was a bit of a let down since I can get close to 20 Mbps without a VPN active.

Zenmate does have an easy way to make tickets and respond to them, but once again we were disappointed to see no live chat options. This is most common with smaller VPN providers, but unfortunately without live chat, customer service is usually slow and a hit or miss solution with tech problems that have to be solved with email chains that can take days.

While Zenmate has a decent VPN app and serviceable speeds in our speed tests, nothing else amazed us. Since there are cheaper VPN providers like Private Internet Access that offer better speeds and a more complete server, as well as more in-depth useful VPNs like TorGuard, we can’t recommend Zenmate VPN has a useable VPN solution.